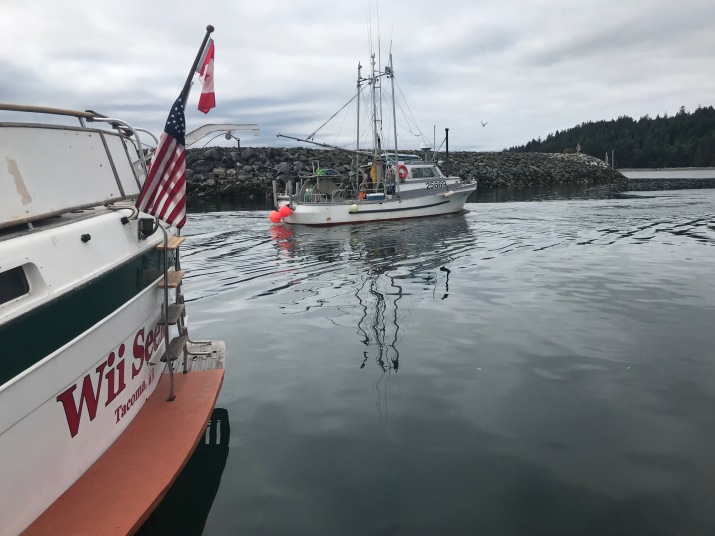 Spending the night in Echo Bay a beautiful and idyllic harbor and home to Billy Proctor’s museum. Billy and Dr. Morton wrote a book about their experiences in the Broughton Archipelago. I would highly recommend the read.

Today we left Sointula as the local salmon fleet was arriving back home and the place was planning to be fully booked. We enjoyed our stay and got first class boat work done by the Tarkanen Boat yard. The people were talented and experienced.

We left early and first took a look at Swanson Island, a location where a group of First Nations individuals led by Ernest Alfred . After a number of close pass bys and photography the farmers got boats in the water to investigate. I was hoping they would come close so we could have conversations, but they stayed off and watched.

The next stop was Midsummer Farm, also owned by Marine Harvest a huge Norwegian corporation, and one of the five major corporations that own farms around the world. I investigated the companies past efforts in Norway and Chile. I was certainly not impressed by their attitude toward nature. Norway presently has killed off most of their wild stock, and Chile had no stock to begin with, so they are just polluting fiords, and estuaries. In Chile I witnessed Fiords quarantined because of the ISA virus.still loaded with farms. The Chilean salmon farms take most of the local wild catch, thus leaving the local people with little fish to eat. For those who believe that salmon farms feed the “people” and are this good… the people they feed are the rich who frequent sushi bars in places like Ohio. So let’s get over that.

At Midsummer farm we picked up a tail. Now I heard that some high priced security firm had been hired to protect the farms and that I should beware. First, I’m doing nothing wrong, and second the only security in the world that I might fear are Afghan security, and when last I checked, they work with me.

Anyhow they were really clever security and followed at a distance looking like a fishing boat. When I did a “crazy Ivan” and took a trip around an island in Blunden Pass… they appeared speeding around the other side probably wondering what the hell happened to me… busted. Frances got good pictures as they sped by and left for the day.

My feeling about security and tails is they just say a company has something to hide and all the more reason to look. Well that’s what we are here for, so we’ll keep watching, and visual media, and truth are what makes a difference today.

Tomorrow we will be off to new adventures.

As a side note we have had 100% support from the people of Canada against these farms. Maybe it is time these people vote in a new government. We in the states are attempting the same, but that is another story altogether.