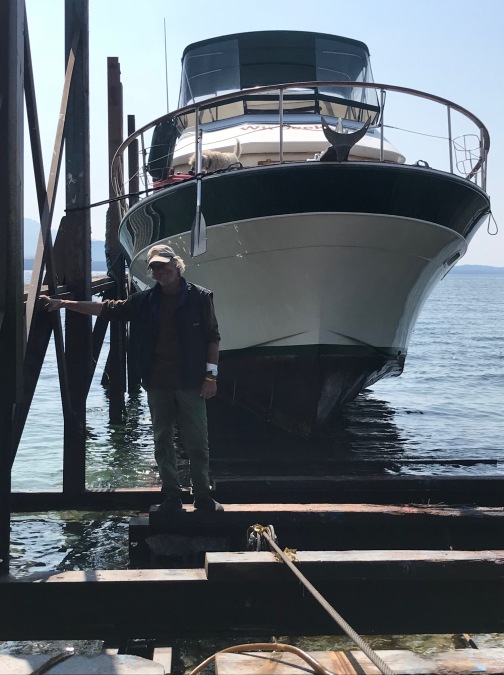 The Wii Seeks was pulled out of the water to day to fix a stuffing box issue. While travelling north we started having a problem so turned around to get it looked at professionally. The trip north of Port Hardy is sometimes a wilderness adventure and one doesn’t want to begin with all systems go… I was recently contacted by Paul Whalen an old friend who is lighthouse keeper off Caution Point, a safe harbor offered if need be. Thank you Paul.

We pulled into Sointula by chance and, I have to say this island is one of the very sane human civilizations I’ve come across in a long time. The town, founded by the Finnish settlers in search of a more equal society moved here. Their town motto is equality and co-operation for all and they seen to live it. Everyone I have met, including a lady fisherwoman who recognized me as “sea shepherd” and said: “she wanted nothing to do with what I was selling…

Well I am definitely NOT Sea Shepherd, and it seems I should make up a T-Shirt! Anyhow after explaining things, we started talking salmon farms. She’s definitely opposed to them and has even caught pregnant escaped farmed females in her catches…. I would assume to biologists and others, that this would be concerning?
What sort of new predator have we let loose on coastal eco-systems? Another myth busted that these Franken-fish will not reproduce.

You have to understand that the salmon farmed here and elsewhere are Atlantic Salmon, not indigenous to the area at all. You see Pacific Salmon are obviously smarter and “don’t farm well”. Whether this means that they don’t like swimming circles in their own poop, or just have bad attitudes toward confinement; I don’t know. It is strange that you can’t bring a non-indigenous seed into Canada, but I guess millions of foreign fish are cool as long as money is to be made. Once again human greed wins out.

These fishermen and women, along with the indigenous people get it, why shouldn’t the rest of us. I realize it is government, by nature, that never listens to those individuals who, by experience and basic knowledge know what is going on. They would rather listen to regulation led bureaucrats and book taught scientists who might never have left the Ivory towers where they normally reside. We need good science to make decisions, but sometimes debate lasts longer then the species one is trying to save. My suggestion is to slow down. Playing god has never worked out well for humans. I can name numerous examples… start by asking Australians about Cane Toads.

Anyhow just now a gentleman came by to question me on whether I had any solutions or was I just protesting… My reply was we can only do so much, but the first solution is to get rid of the farms. This will not bring back wild salmon, but it will be a start. The next are forestry practices which we humans have been attempting to address. The next is run off which we all have a part in, and my biggest beef locally is the city of Victoria still dumping raw sewage daily in the local waters. We have heard of the tons of the prescription drugs, and other pollutants that are beginning to show up in everyone’s system. Yes, I told the gentleman, there are lots of issues but we at gaianetwork want the farms gone. Let the larger organizations step in with solutions.

The GMO issue is still undecided by corporations and scientists, but logic tells me to beware. The first tests show rats fed GMO corn form non-malignant tumors, and these farmed fish are covered in tumors. One doesn’t need to be a scientist to make that connection. Go to Dr. Alex Morton’s website to see the viruses and pollutants found in fish sampled in the past. Make up your own mind.

I am not one to dwell on the negative, and towns like Sointula give me hope of what societies can be like through co-operation, common sense, and respect for others. We all share the same planet; let’s all take positive steps to make the world a better place for all. The time for talk is over. Get off your couch and make a difference, I have and you can too.