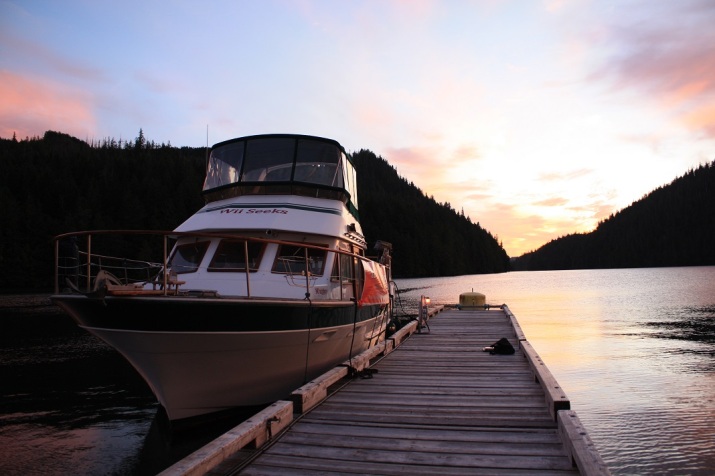 We’ve spent the last few days on a salmon farm tour of the Queen Charlotte Straits, British Columbia, Canada. This wilderness teems with eagles, bear, whales, rare seabirds, and wild salmon… well that is now, the future is still in doubt. The last two days we have visited a dozen farms and or proposed farm sites in a very small geographical area… the boat only goes 8 knots so we are not speeding around by any means.

These farms have colorful names like Midsummer Farm, Arrow Pass, Upper Retreat, Blunder Pass, Potts Bay, Glacier Falls, and even a couple called Cecil and Maude. Actually the last two were my favorite. Cecil was empty with abandoned pens and buildings, and Maude was gone, hopefully forever.

Now where they went, and why they were closed is research for another day, but I have my suspicions that once these corporations pollute and contaminate one cove, they move on to another. We also visited two “proposed sites” perhaps getting to view them the last time in their natural state.

Another coincidence appears to be that the marinas and local tie-ups where we stayed the night were all once famous and well known to salmon fishermen. They too have quaint names like Alert Bay, Echo Bay, and Sullivan Bay, but the fisherman are no longer catching fish. As we sit and watch the sun set around communal tables you hear the stories of old. The great catches that all fishermen brag about, but today they all end with: “well I got nothing today”.

At Pierre’s marina where you could once catch 100 pound salmon off the fuel dock; now there is nothing. Today, Pierre has a well-known pig roast each Saturday night to attract the yachting crowd. One has to think back to when the main dish must have been salmon, wild salmon.

Have we humans come to the point that we are just accepting the death of wilderness, or have we just lost the courage to face the unknown?

The crew of Gaianetwork.net are not afraid of the wild. We cherish it, and I relish the fact that nature is in control, not me. We believe that these open pen salmon farms should go, not only for the health and pollution reasons, but for downright primal reasons. Who are we as a species? Must we control and dominate everything, or can we revert back to our ancestors’ way of thinking to become more in tune with nature. Primitive tribes are in touch with their environments; they need to be to survive. Most humans today are not, and we as a species are not better off for it.

A great conservationist Doug Tompkins once explained it like this: if you are walking a path and come to a cliff, do you precede forward to your death, or is the prudent thing to do to take a 180 degree turn and continue forward… just in the opposite direction. Modern thought seems to say step forward no matter what, but I’ll listen to Doug. Progress is not just forward, and we as a species should beware.

It is a question all of us must answer now, or we will pass the problem down the road to our children and grand children. I will make the stand today and hope others will join me.